Sri Lanka is a teardrop shaped island in the Indian Ocean and is blessed with all the ingredients for a perfect sun and sand holiday. The endless golden sand beaches trimmed with palm trees, the sparkling blue Indian Ocean waters, and the warm and tropical year-round climate is just perfect for whenever you want to enjoy the beach. These are actually just the basics…and we’ve definitely got them right. But if you’re looking for a deeper experience on your beach holiday with a mix of relaxation, privacy, seclusion, fun, excitement, adventure and an opportunity to truly mix with the culture of the country and its people…then Sri Lanka is possibly among one of the few countries in the world with the ideal beach holiday concoction.

Arrival at Colombo International Airport. Our tour representative will meet and transfer to your hotel in Negombo.

The city tour includes a visit to the famous ‘Dalada Maligawa’ (Temple of the Tooth Relic), the main Kandy Market, a spice garden, the gem museum and other interesting places. You will also see the beautiful manmade Kandy Lake which is located close to the Temple. 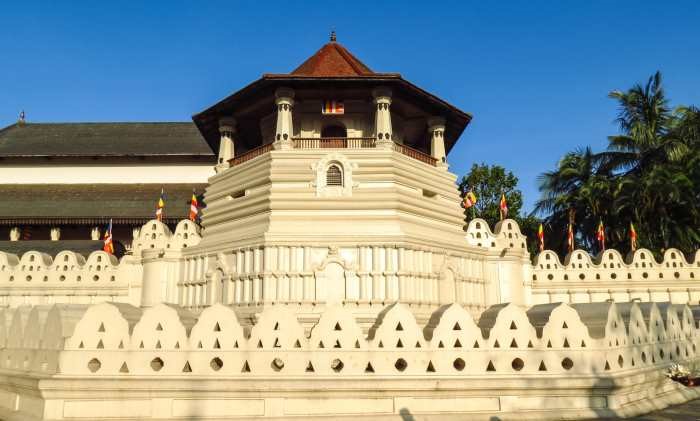 Sri Dalada Maligawa or the Temple of the Sacred Tooth Relic is a Buddhist temple in the city of Kandy, Sri Lanka. It is located in the royal palace complex of the former Kingdom of Kandy, which houses the relic of the tooth of the Buddha. Since ancient times, the relic has played an important role in local politics because it is believed that whoever holds the relic holds the governance of the country. Kandy was the last capital of the Sri Lankan Kings and is a World Heritage Site. Mainly due to the temple. Bikkhus of the two chapters of Malwattu and Asgiriya conduct daily worship in the inner chamber of the temple. Rituals are performed three times daily: at dawn, at noon and in the evenings. On Wednesdays there is a symbolic bathing of the relic with an herbal preparation made from scented water and fragrant flowers called Nanumura Mangallaya. This holy water is believed to contain healing powers and is distributed among those present. 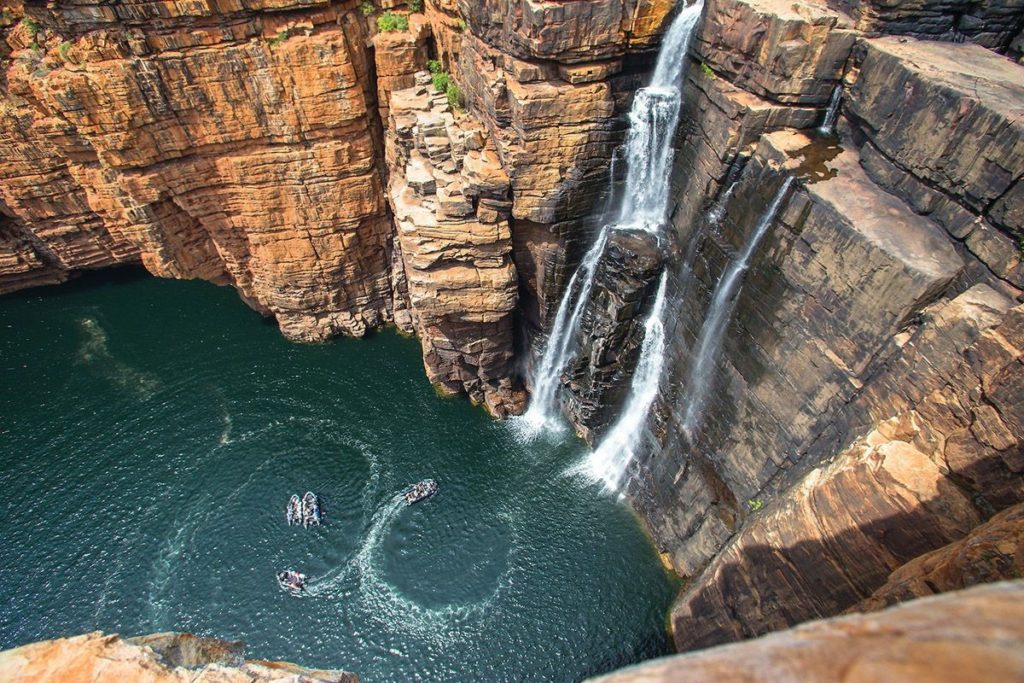 Devon Water Falls is situated 6 km west of Talawakele, Nuwara     Eliya District on A7 highway. The falls named after a pioneer English coffee planter called Devon, Whose plantation is situated nearby the falls. The Waterfall is 97 metres high and ranked 19th highest in the Island.

Horton Plains National Park is a protected area in the Central highlands of Sri Lanka and is covered by montane grassland and cloud forest. This plateau at an altitude of 2,100-2,300 m is rich in biodiversity and many species found here are endemic to the region. This region was designated a National Park in 1988. It is also popular tourist destination and is situated 8 Km from Ohiya, 6Km from the world famous Ohiya Gap/Dondra Watch and 32 Km from Nuwara Eliya.

The Horton Plains are the headwaters of three major Sri Lankan rivers, the Mahaweli, Kelani and Walawe. In Sinhala the plains are Known as Maha Eliya Plains. Stone Tools dating back to Balangoda Culture have been found here. The Plains’ vegetation is grasslands interspersed with montane forest and includes many endemic Woody Plants. Large herds of sri Lankan Sambar Deer feature as typical mammals and the park is also an important Bird Area with many species not only endemic to Sri Lanka but restricted to the Horton Plains. Forest Dieback is one of the major threats to the park and some studies revealed that it is caused natural phenomenon.

The sheer precipice of World’s End and Bakers Falls are among the tourists attractions of the park.

After Breakfast enjoy the Nuwara Eliya to Ella Train Ride.

Transfer to Ella by train. Our guide will pick up you from Ella railway station. By train Nuwara Eliya to Ella is one of the most beautifully scenic train journeys in Sri Lanka, and we recommend all travellers take this route if possible. This train powers up through Sri Lanka’s southern hill country, through the tea plantations, into the clouds and then weaves in and out of the many mountain tunnels as it descends to reach Ella.

The Nine Arches Bridge also called The Bridge in the Sky is a bridge in Sri Lanka. It is one of the best examples of colonial – era railway construction in the country. The construction of the bridge is generally attributed to a local Ceylonese builder, P.K.Appuhami, in consultation with British Engineers. The chief designer and project manager of ‘upcountry railway line of Ceylon’ project was D.J. Wimalasurendra, a distinguished Ceylonese engineer and inventor.  The designer of the viaduct was Harold Cuthbert Marwood of Railway construction Department of Ceylon Government Railway. The 1923 report titled “Construction of a Concrete Railway Viaduct in Ceylon” published by the Engineering Association of Ceylon has details of all the records including the plans and drawings.

It is located in Demodara, between Ella and Demodara railway stations. The surrounding area has seen steady increase of tourism due to the bridge’s architectural ingenuity and profuse greenery in the nearby hillsides.

Popular rumours suggest that when construction work commenced on the bridge, the Great War began between empires of Europe and the steel assigned for this site was reallocated to Britain’s War related projects at the battlefront. As a result, the work came to a standstill, Leading the locals build the bridge with stone bricks and cement, but without steel.

Breakfast at hotel. Proceed to Tangalle.

After dinner visit the ‘Rekawa Turtle Sanctuary’ leave the hotel around 8 pm as Turtles come out quite late in the night. 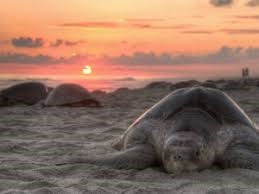 Rekawa Turtle Watch – Admire beautiful sea turtles and take part in efforts to protect them at turtle conservation project Turtle Watch. Join a group of around 20 people and watch as the turtles lay eggs on the beach. The organization protects the turtles and provide them with a safe place for hatching, far from natural predators, on a beach that’s cleaned daily in order to provide adequate nesting grounds. Tours take place at night; you’ll be asked not to take photos or disturb the turtles in any way.

Galle Fort in the bay of Galle on the southwest coast of Sri Lanka, was built first in1588 by the Portuguese, then extensively fortified by the Dutch during the 17th century from 1649 onwards. It is a historical, archaeological and architectural heritage monument, which even after more than 423 years maintains a polished appearance, due to extensive reconstruction work done by Archaeological Department of Sri Lanka.

The fort has a colourful history, and today has a multi-ethnic and multi-religious population. The Sri Lankan government and many Dutch people who still own some of the properties inside the fort are looking at making this one of the modern wonders of the world. The heritage value of the fort has been recognized by the UNESCO and the site has been inscribed as a cultural heritage UNESCO World Heritage Site under Criteria 4, for its unique exposition of an urban ensemble which illustrates the interaction of European architecture and South Asian traditions from the 19th Centuries.

The Galle Fort, also known as the Dutch Fort or the “Ramparts of Galle”, withstood the Boxing Day tsunami which damaged part of coastal area Galle Town. It has been since restored.

Today you will go an excursion to watch Whales – best time to leave is at 6 am. You can request the hotel for a packed breakfast and have it on a boat while watching Whales and Dolphins.

Whale watching is the practice of observing whales and dolphins (cetaceans) in their natural habitat. Whale watching is mostly a recreational activity, but it can also serve scientific and/or educational purpose. A study prepared for International Fund for Animal Welfare in 2009 estimated that 13 million people went whale watching globally in 2008. Whale watching generates $2.1 billion per annum in tourism revenue worldwide, employing around 13,000 workers. The size and rapid growth of the industry has led to complex and continuing debates with the whaling industry about the best use of whales as a natural resource.

After whales proceed to Colombo and do the city tour.

Colombo City Tour –Colombo is the commercial capital and largest city of Sri lanka. According to the Brookings Institution, Colombo metropolitan area has a population of 5.6 million, and 752,993 in the City Proper. It is the financial center of the island and a popular tourist destination. It is located on the west coast of the island and adjacent to the Greater Colombo area which includes Sri Jayewardenepura Kotte, the legislative capital of Sri Lanka and Dehiwala – Mount Lavinia. Colombo is often referred to as the capital since Sri Jayewardenepura Kotte is within the urban area of, and a suburb of, Colombo. It is also the administrative capital of the Western Province and the district capital of Colombo District. Colombo is a busy and vibrant place with a mixture of modern life and colonial buildings and ruins. It was the legislative capital of Sri Lanka until 1982.

Due to its large harbour and its strategic position along the East-West sea trade routes. Colombo was known to the ancient traders 2,000 years ago. It was made the capital of the island when Sri Lanka was ceded to the British Empire in 1815 and its status as capital was retained when the nation became independent in 1948.

Day is free for your own arrangements until the departure.