The Oldest and Grandest of all Buddhist Festivals in Sri Lanka 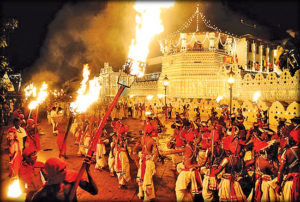 The month of Esala (July), during which period this annual pageant is usually held, had been considered a month of celebrations and festivity, both among Indians and Sri Lankans. Even from the lifetime of the Buddha in the 6th century BC, the Esala festival was held to commemorate the Buddha’s Conception, his Renunciation and the First Sermon. Esala is also considered to be the beginning of the raining season (Vassana) when the monks commence their Retreat. Also, this month is considered to be the period when ritual performances to the protective divinities are held, (eg Pattini puja) as recorded in the text ‘Pattini-Halla’.    Being considered a ‘chaste’ month, the period is held sacred for the availability of water, hence prosperity.
Several records have been left behind by dignitaries and other visitors to the island such as Robert Knox, John Davy, etc. The description of the perahara. These accounts provide much evidence as to the constitution and organization of the present day perahara. Yet many features seem to have been added and some changed to suit the time and the available resources and conditions.Dalada procession and the social traditions are linked so much together; the month of Esala has been named as the procession month, because of the Esala feast. In the 18th century at the time of King Keerthi Sri Rajasinghe the four Devala Peraharas and Dalada Perahara were amalgamated and were made series of Peraharas. The procession is a complex procedure in which various customs are involved.
The preliminary preparation for the perahara commences at the beginning of every year. Immediately after the Wesak and Poson pageants steps are taken to inform the owners of elephants the number of tuskers and elephant required measures of repair the dresses worn by the elephants and prepare new dress if required. Measures are taken to repair the required implements like oil torches etc and to fulfill the requirements to make the perahara a success. The astrologer attached to the Sacred Tooth (Nakath Mohottala) is required to prepare an auspicious time for pageant to be inaugurated. Later a meeting of state official and delegates of voluntary associations with the patronage of the Mahasangha is summoned to discuss matters pertaining to services to be executed to make the perahara a glorious event.